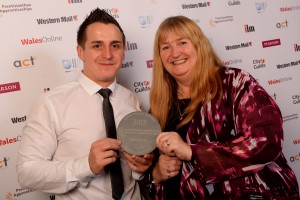 Liam Gill, Bridgend College apprentice, was crowned Apprentice of the Year at a high profile ceremony in the Celtic Manor on Thursday 29th October 2015

A successful career change from personal trainer to engineer paid dividends for Liam Gill when he won a major honour at the Apprenticeship Awards Cymru 2015.

Liam, 26, who has found his true vocation in life working for Ford Motor Company, Bridgend , was named Apprentice of the Year at the high profile awards ceremony held at the Celtic Manor Resort, Newport on Thursday.

“I really didn’t expect that,” he said after receiving his award.

“It was an accomplishment just to get shortlisted and I can’t believe that I’ve won.

“Changing my career was the best move I’ve ever made. I had been to university but that didn’t suit me and I only realised how good apprenticeships are when I started one. It has paid off massively and I’m so chuffed.”

He was one of four finalists competing for this prestigious award. One of the other finalists in his category was also a former Bridgend College apprentice, Megan Wilkins.

He attended Bridgend College to learn workshop skills, maintenance techniques and more. He then went on to his second year of his apprenticeship in the training 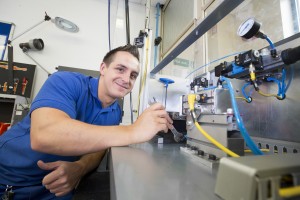 department at the Bridgend Engine Plant, with one day a week in college.

“I started my apprenticeship with Ford at the age of 24, older than most others on my course,” he said. “I have always given my best efforts to achieve high standards and as well as this I wanted to set a good example for the younger apprentices. I want to build the best career that I possibly can out of this opportunity and have always shown willingness to learn, enthusiasm and initiative.

“The Apprenticeship has been the best thing I have ever done, the training techniques and fault diagnosis have been superb and I will be able to use these experiences to take with me when I qualify. I have developed skills specific to my career in engineering as well as other, broader skills that will benefit my career.”

Deputy Minister for Skills and Technology Julie James congratulated Liam and the other award finalists. “We have some truly exceptional apprentices here in Wales and the Apprenticeship Awards Cymru provide a perfect platform for us to celebrate their hard work and achievements,” she said.

“Equally important are the training providers and employers who go the extra mile to support their apprentices. Developing skilled young people is vital for our economy. The Welsh Government is committed to training programmes such as Apprenticeships but investment must be a shared responsibility with the education sector, businesses and individuals.”